The RHS Tatton Flower Show gets scribbled on the calendar 1st January each year and we haven’t missed one yet, but this time it was pipped at the post by The Chelsea Flower Show, booked before the calendar was even out of its packet. A few glasses of wine and a bracing walk on a North Wales beach in late December brought on a desire for us three sister-in-laws to get together more often. Chelsea was an instantly popular suggestion and without further ado tickets were bought and the date was set.

(Quick introduction to the cast of this blog: me, Jane,  I hope you know me if you’re reading my blogs, but if not, professional, totally obsessed photographer, nearer 50 than I’d like; sister-in-law, Debbie, married to my little brother and the “baby” of the three of us; Teresa, married to my older brother, lives literally on afore-mentioned North Wales beach and has just crossed the half century marker – oh and she’s the posh one!) 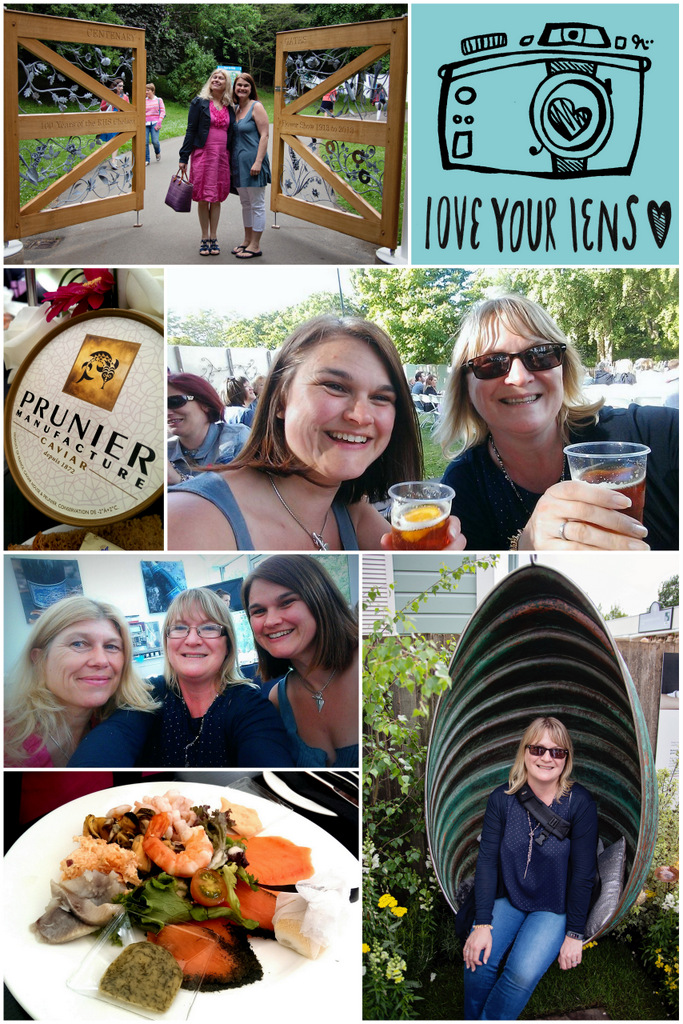 The sister-in-laws do Chelsea

5 months later to the day, we met up in Coach B on the 7.57am to that London (made famous by the Runcorn sit com “Two Pints of Lager & a Packet of Crisps”). The tone for the day was set as we got off the train, Debbie and I trying to work out which tube line went to Sloane Square and Teresa pulling us in the direction of the taxi rank. We didn’t exactly need to be dragged and if you’re not in that London very often, travelling overground offers great people watching opportunities and chance to ogle the shops and restaurants. I was convinced every cyclist was about to die and couldn’t bear to watch them weaving in and out of gaps between fast moving hunks of metal.

Many heart-stopping moments later we were deposited at the end of the queue for Chelsea, bombarded with leaflets advertising events us northerners wouldn’t be around to attend. There was an air of excitement, anticipation and camaraderie that continued throughout the day, none of this “don’t talk to strangers” I associate with London.

Obligatory coffee and Pimms (for the posh one) done we set off, impressed immediately by the quality and innovation of items on sale at the trade stalls. Tatton does get a bit repetitive and predictable and it was great to see lots of new products and crafts on sale. Teresa placed an order for a beautiful metal bird feeder that you’d never find in Homebase. I’d want to somehow keep pigeons (in her case, seagulls) off it and only make “nice” birds like robins, tits and finches welcome. 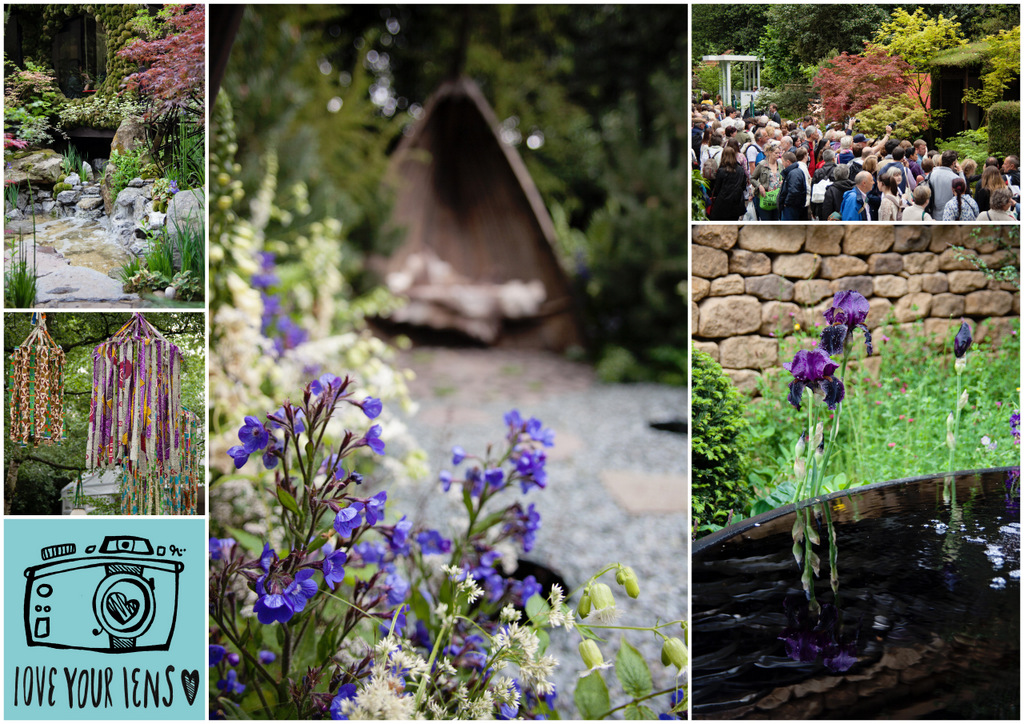 I haven’t mentioned yet how busy it was. The Artisan Gardens were the first we tried to look at and were dismayed at first that we couldn’t get to the front. My years as a student trying to get to the union bar for a pint of cider came in useful and somehow I managed to wriggle in, get some pictures and wriggle out again. At one point I referred to it as popping in and popping out and an elderly chap said he would call it that as well; I advised him not to “pop out” too often! The Japanese Togenkyo Garden was stunning, especially the green pom pom wall. Unfortunately I just couldn’t get close enough to do it justice with my camera. The pond with dyed black water in Welcome to Yorkshire was really striking and created reflections of the irises and stone and metal wall. I think my favourite of the artisan gardens was The Viking Cruises Norse Garden. The blue, green and white colours of the planting scheme are personal favourites and worked really well with the grey/blue slate gravel and the wooden Viking ship bench. It looked achievable and I felt there were ideas I could use in our garden.

The media described Chelsea as a washout on Thursday 22nd – well I was there and it wasn’t! Drama queens! We had a short shower just as we finished viewing the artisan gardens and actually it was quite pleasant standing on a small hill under a tree watching the sea of umbrellas and an optimistic cream parasol bobbing along. 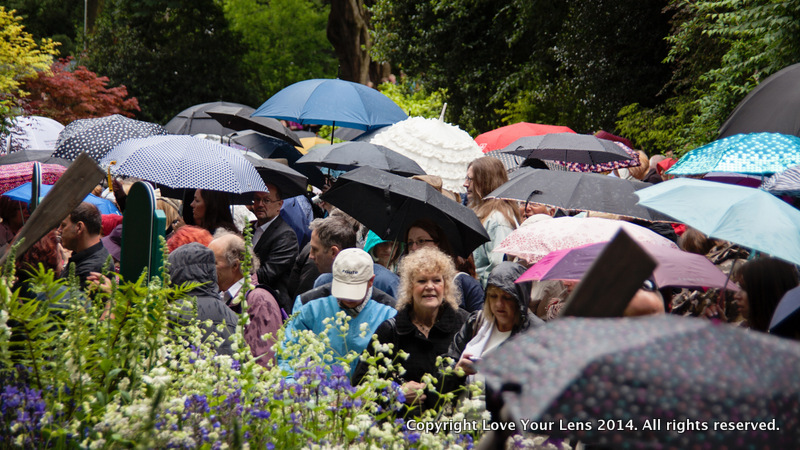 The next weather event was a bit more impressive, but we saw the clouds looming, felt the breeze whipping up and headed into the Great Pavillion. As the lightening flashed, thunder roared and the rain drummed on the roof, we were swept along with the crush of people in the main aisles, occasionally spat out into little areas of relative calm. At times it was downright unpleasant and made it very difficult to see anything. As Debbie and Teresa battled determinedly through the spectacular (and huge!) Hillier garden, I enjoyed photographing the fabulous tulips on display. 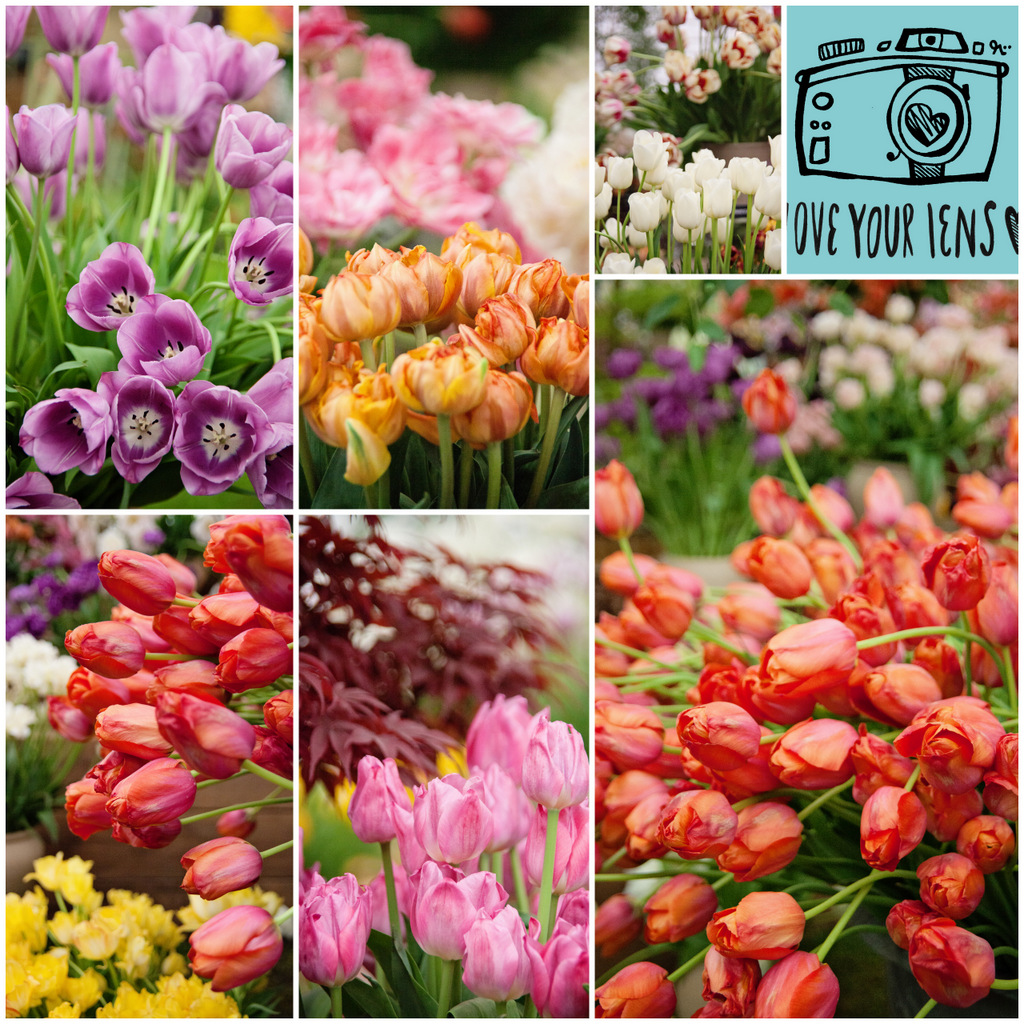 Tulips in the Great Pavilion

I can only really describe the Great Pavillion as an unbelievable (and very pleasant) assault on the senses: the vibrant colours and sheer beauty of the flowers and plants wherever you looked for as far as the eye could see and the brilliance of the displays; the textures of silky petals, frothy blooms, bristly pine trees, the not so pleasant crush of bodies every now and again; the scent of almost every flower under the sun; the babbling of excited and amazed visitors against a background noise of crashing thunder and torrential rain. 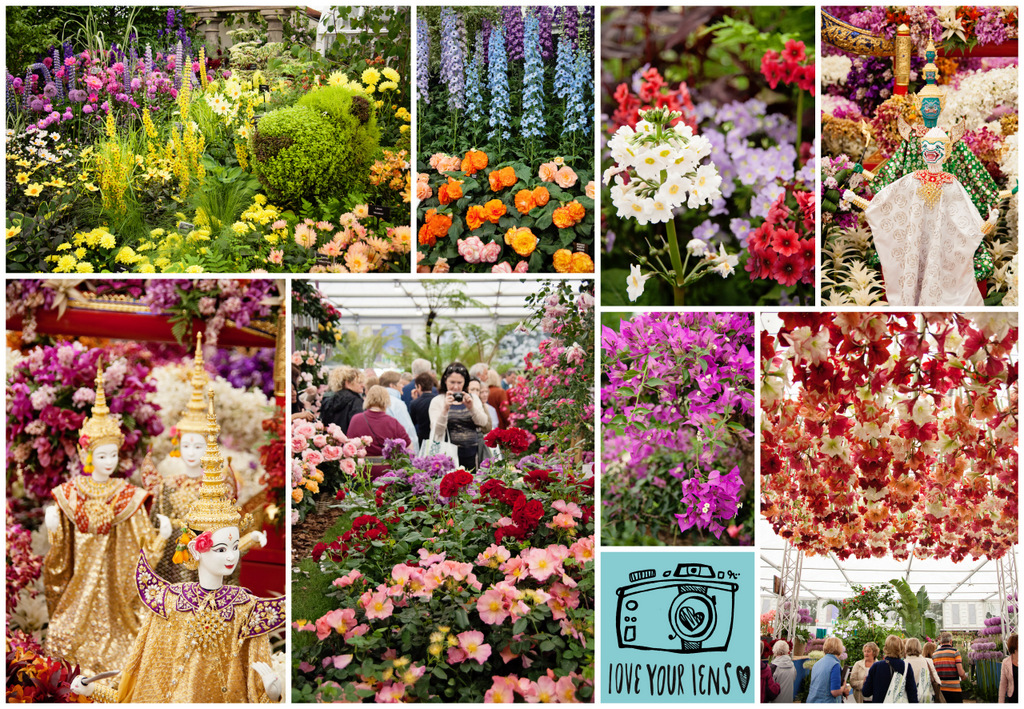 The creativity and hard graft that must go into creating and maintaining the displays for almost a week is staggering. I was in absolute heaven and in danger of wearing out the shutter button on my camera. By the way, I was using a Canon 5D mkII with a Tamron 28-300mm lens. I shot mainly in Av mode, using the largest aperture, and outdoors my ISO was mainly around 200, but in the Pavilion during the rain storm it was up around 3200 to cope with the low light.

We emerged from the Pavilion into a sunny, sparkling world, with the occasional large puddle to negotiate. Headlines stating “Chelsea was a washout” were completely over dramatic. Perhaps us Northerners are more used to the odd sharp shower? Aware that we had not yet seen the Best In Show garden, we headed to Main Avenue. I wasn’t immediately impressed by the Laurent Perrier Garden, viewing it first from the side, as the crowd was 10 people deep at the front. However, I wiggled to the front and it started to grow on me. The late afternoon sunlight playing on the pale yellow and green planting in the foreground and the simplicity of the layout worked and I could easily imagine sitting with a book and a glass of something cool, my feet in the water and watching the light change under the trees.

It’s hard to pick a favourite show garden but if pressed I would choose Hope on the Horizon with its blue, yellow and purple planting and soft grasses contrasting with the hard granite blocks. It felt so peaceful and beautiful, just the place you’d want to rest and recuperate. I loved the red planting in the large garden with the arching water feature (I haven’t been able to find its name – I wish the RHS website would have more photographs of each garden along with names). Alan Titchmarsh’s Britain in Bloom was lovely, with the coast, dry stone walls and natural planting. I’m not sure if the litter in the pool was intentional or not. 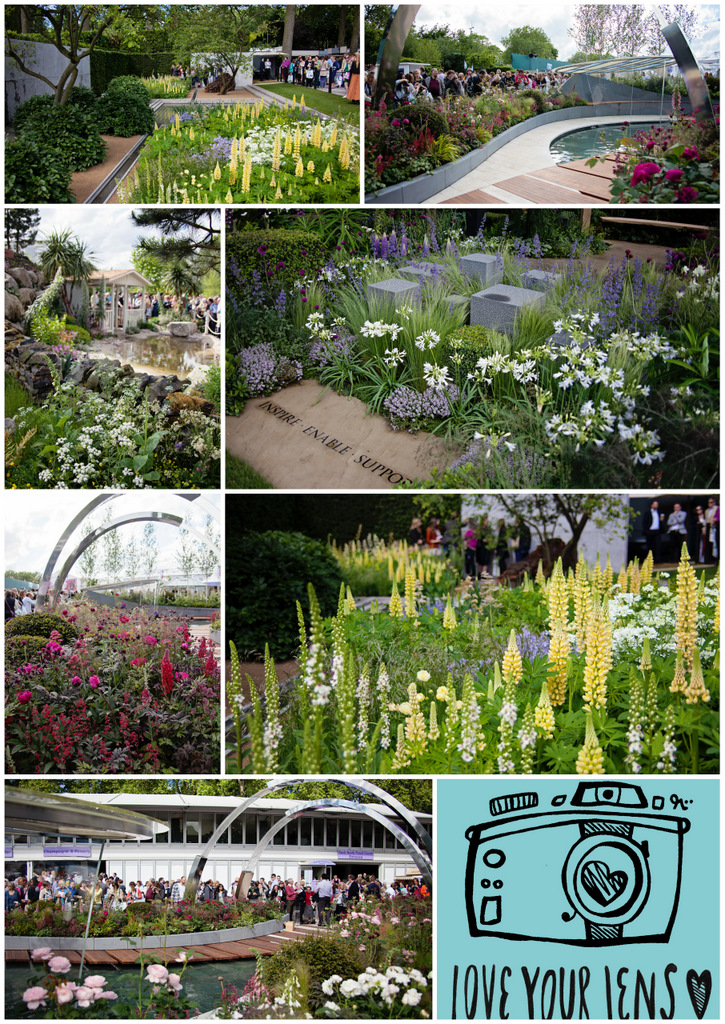 I’ve omitted to mention our slightly boozy lunch, no doubt responsible for us missing quite a few exhibits; I’ve been following Chelsea on the BBC most days and keep spotting gardens we definitely didn’t see. I felt miffed at first, but then concluded that as our aim had been to have an enjoyable day in each other’s company, at one of the world’s most prestigious flower shows, we had more than achieved that! Lunch at Tatton is usually on a small budget, as we like to save our pennies for buying plants and garden nick nacks. As this was possibly our only ever trip to Chelsea we splashed out and dined in the Seafood and Champagne bar, sharing a seafood platter and a bottle of Sancerre and catching up on five months of gossip.

I think we’ll remember Chelsea for a long time and we three sister-in-laws will find it hard to top as a day out – suggestions anyone? Something a little less extravagant if it’s this year!

How to get blurred backgrounds in photos – with the aid of some meerkats – “simples!” (Part 3 – Distance)
Looking to buy your first D-SLR? My best recommendation for beginners